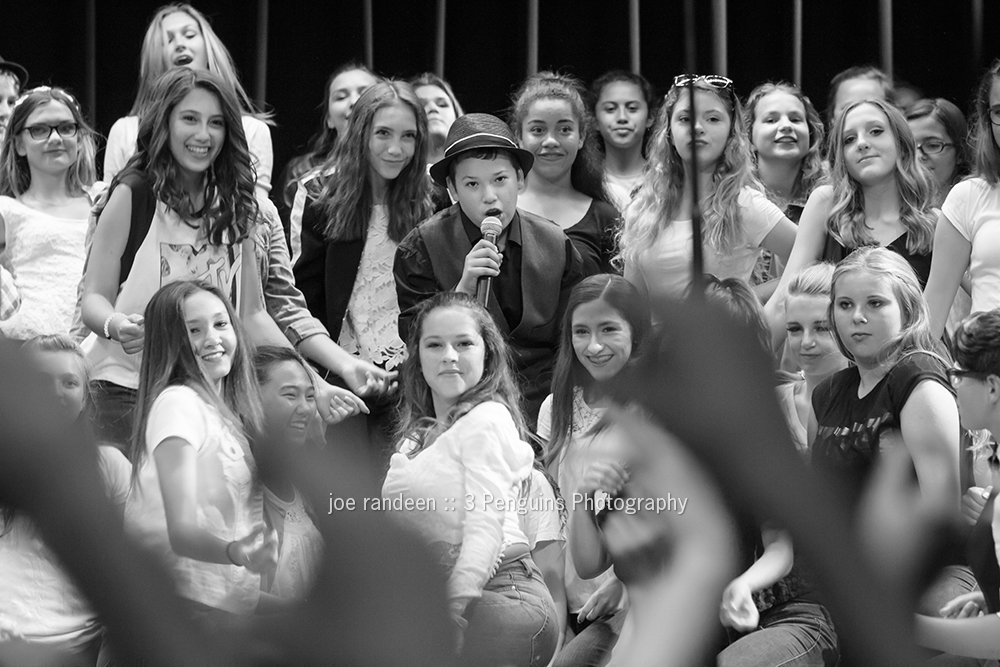 The Oak Show Choir had their closing night performance for the 2015-2016 season.  I had to pleasure to photograph this last concert. The biggest challenge was shooting in low light conditions.  This was overcome with fast glass and high ISO.  I couldn’t sacrifice shutter speed due to the fact that the kids were dancing.  But, I couldn’t go too fast as my shots would have been far to dark.

Other challenges included: Irregularly lit stage (many hot and dead spots), not being able to move from my location, and stationary items that sometimes blocked the kids. That said, challenges are meant to be overcome.  Get the shot no matter what.

The low-light was overcome by, what I mentioned earlier, fast glass.  Fast glass refers to lenses with large apertures. The aperture is the opening of a lens.  I shot with a f 2.8 and a f 2.0.  I used the f 2.8 only for a short time.  It is a wide angle lens and I wanted shots of the entire ensemble. This did not work as I had hoped since the piano player, in the live band, was right smack in the middle of every shot.  So, I switched to my f 2.0 zoom lens and focused in on single or small group shots.

I also mentioned that I shot at a high ISO.  It wasn’t too high, 1600 ISO.  Most cameras today can easily handle this.  That being true, due to the low-light there was some graininess. Don’t be afraid of grain though.  Far too many think grain is a bad thing.  We are getting so used to High Definition TV’s that we want everything crystal clear.  The end results is that we think that any grain is bad.  It’s not.  So, don’t stress on it. In the days of film, we didn’t stress on it. What is more important, in this case, is capturing a point in time that is very important to these kids and their family. If it was a commercial shoot, that would have been a different story and we would make allowances to address it.

I ended the evening with around 300 really nice shots.  If you’re a parent or student, and you wish to purchase any shots, please contact me to view a private gallery.