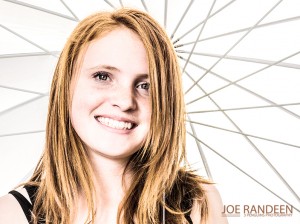 While writing a review for the Flashpoint 180 Monolight and the 71″ Glow Grand Softbox I wanted to test these two products in a bright environment, where I really need to kick a lot of light on my subject since I was using a white shoot through umbrella as my background.

As you can see from the photo on the left, there’s been some post production work, but that’s neither here nor there. Nor is this about my review. (see initial review) What I wanted to touch on was using something other than a classic backdrop or something found in nature.  In this case I wanted to increase the light hitting the back of my subject but not have to deal with direct sunlight.  Seen that done too many times and frankly I’m bored.

I remember seeing a high fashion shot about a year ago where the photographer used a huge white shoot through umbrella.  But, that was shot in a studio with very controlled conditions.  Beautiful shot though.  I wish I could remember where I saw it because I would love to share it with you. 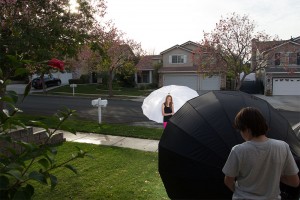 Back to my story, I purchased this 7 foot umbrella from Adorama about a year ago.  It’s HUGE and works great when you’re outdoors and need to soften that noon time sun.

I had my subject drape it over her shoulder, standing with her back toward the sun so that the umbrella lit up.  Then I took the Flashpoint 180 Monolight and the 71″ Glow Grand Softbox and placed it right in front of her, about 10 0r 11 feet away.  Turned the monolight up to full power and got a beautiful shot, in my opinion at least.  I liked the umbrella ribs behind her and with quasi high-key effect I think it works.

My point – experiment with different backgrounds to create something out of the ordinary for your portraits. Now go out and shoot.